Lucky I started ahead of time because it’s already more than two weeks since my birthday, and I haven’t gotten around to reading any more short stories. I did, however, read Marlene Van Niekerk’s Agaat which absolutely blew my mind, and was over 600 pages long. So, I don’t feel too bad.

Second story – one of my favourite authors, Chimamanda Ngozi Adichie. If you haven’t read any of her books you are SO lucky, because now you have the chance and I’m jealous!!

I read Americanah first, at a very tough time in my life, and particular sentences have stuck with me to this day. I then read Half of a Yellow Sun about the Biafran war in Nigeria (an epic, you miss the characters, both love and despise them, it’s truly phenomenal) and Purple Hibiscus (a family drama that is powerful and painful). I’ve watched her talks on feminism, the importance of African writers writing for themselves, and have critiqued her engagements with gender. She is an imaginative, creative, and skilled writer. Reading her books is like diving into another world, being immersed in it, and having to come up for air but wishing you could breathe under water. 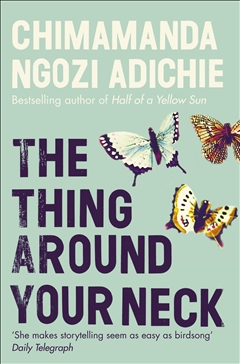 So, when I visited the library last week, paid all the fines that I’d incurred by taking so long to read Agaat, and my eyes landed upon her collection of short stories The Thing Around Your Neck, of course I picked it up.

The shout on the cover says ‘She makes storytelling seem as easy as birdsong.’ The book contains twelve stories, and as with Kazuo Ishiguro’s book, I started with the first one, Cell One.

First sentence: The first time our house was robbed, it was our neighbour Osita who climbed in through the dining room window and stole our TV, our VCR, and the Purple Rain and Thriller videotapes my father had brought back from America.

The sentence made me laugh, because it sounded like I was talking to a fellow South African (after all, we’ve all been robbed before). The sentence implied a sense of the inevitability of being robbed, even by ones neighbour, which for some reason made me smile. But this sentence works much harder than that. It tells us that the family who is being robbed is wealthy (they own a TV and VCR, they’ve been to America), they are living in Nigeria but not untouched by American culture (MJ and Prince), and they know their neighbours by name. The sentence also tells us that by the end of this story, they will be robbed again. It creates a world and a plot in just a few words.

The story is set in the University town of Nsukka, a name I recognised from Half of a Yellow Sun which is also set there. The families in this neighbourhood are academics, but as the story progresses young men and boys in the community become caught up in ‘cults’ (what we would call gangs) and so the robbing and crime increase. It’s a story that considers the futility of retaliation, and the confusion of belonging.

The narrator’s brother becomes a part of this criminal world, with severe consequences, and finds himself arrested after staying out past a curfew. The story explores the family’s reaction to this. Their denial, their smugness, their helplessness, their relief when in the end he is returned to them.

Though the focus of the story is the family, Adichie also explores the theme of the treatment of prisoners by police in a situation where police are lawless themselves. She doesn’t preach to us about it, but you are unable to read about it without thinking about how unjust and inhumane it is, particularly when an elderly man is arrested because the police can’t find his son who has committed the crime. We read about police roadblocks, the normality of bribes, and the ability to almost live a normal life within this. It felt so familiar to me as a South African reader, and as a South African who lives a good, financially secure life amidst broader societal collapse.

I suppose what I took from this story is the idea that thinking yourself different / separate / other than the society you live in is just a farce, but also, that people always have the possibility to surprise you.

I’m looking forward to reading the rest of the collection.